(OUTview NW) RE-view: "OZ anew"-The Concert, a Work in Progress but almost there! 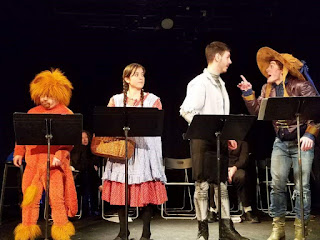 The Top 4 and their Costumes were a Triumph! (Jacobs/206)

Our Pal, Michael Gershowitz has been busy this past year fine tuning his Musical now turned Operetta version of the Wizard of Oz, the only version to actually base it by the original works of L. Frank Baum.

All the songs in OZ anew, are new and unique and in the course of a year went from 85 to 34 songs, mostly written by Gershowitz. I had the pleasure to attend his special Live Concert, this past weekend at the Annex Theater in Seattle's Capitol Hill. 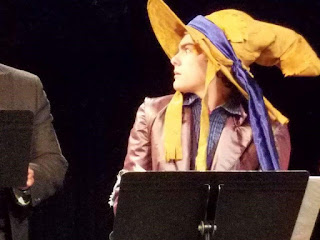 Meyer (and Costume) were a highlight! (Jacobs/206)

Despite not having an orchestra, just a piano played by Music Director, Gregory Smith, it was all about the music.The Costumes by Ron McCain, Jenny Lynch and Gershowitz are also a huge highlight. Some of my favorite songs were, Some Place to Call Home, I've Felt This Way Before, and Farewell Sweet Sorceress. It was the comic genus of actor, Joel Meyer as Scarecrow and his song, Brainless that brought laughter from the audience. Also noteworthy was the flamboyant performance of Gershowitz as the Cowardly Lion for Pussy Cat/Dorothy's Rage.

The singing talents of Gabriela Noble as Dorothy with Kristen Lang as Locusta, Andrew Bullared as the Tin Man and Matthew Fitzgerald as Private Gruph were the strongest singers along with Gershowitz and Meyer.

Adam Hegg as Baum/Oz, and Wendy Cohen as Agora looked good but did not have the singing chops to perform great songs like, Agora's lament, Oz the Great and Give me the shoes, bitch.

Now, I would love to hear how OZ, anew will sound with with Strong Cast and a full orchestra. Perhaps a Concept album to get those Broadway producers calling, and then this little show would finally be heading in the right direction.

For More photos and info on OZ, anew, please check out their site at http://wwozanewmusical.webs.com

Oops, you forgot something.

The words you entered did not match the given text. Please try again.

Start a Free Blog at Webs.com